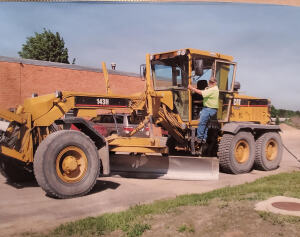 Allan Eugene Braun, age 77 of Le Sueur, died suddenly at his home on Tuesday, July 26, 2022.  Funeral service will be at Zion United Church of Christ in Le Sueur at 11:00 a.m. on Saturday, July 30, 2022.  Followed by military honors in the church parking lot then lunch in the church social hall.  Burial will be at a later time in Salem-Tyrone Cemetery in Tyrone Township, Le Sueur County.  Visitation will be on Friday, July 29, 4:00 p.m. ~ 7:00 p.m. at the Kolden Funeral Home in Le Sueur and 1 hour prior to the service at church on Saturday morning.

Allan was born on the family farm in Tyrone Township, Le Sueur County on April 6, 1945 to Martin and Marjorie (Davis) Braun.  He grew up on the family farm and graduated from Le Sueur High School in 1964.  After graduation he served in the United States Army for four years, spending most of his time in Germany.  When he returned home, he married  Geraldine “Geri” Lutz at Immanuel Lutheran Church in Mankato on May 15, 1971.  He worked for Johnson Aggregates for 13 years.  He then began a long career with Le Sueur County and operating heavy equipment, retiring at the age of 65 in 2010.  He later worked part- time in security at Le Sueur Inc. until his passing.  Allan enjoyed playing cards with family, watching football and baseball on T.V. and played in a horseshoe league for years.

He is preceded in death by his parents.