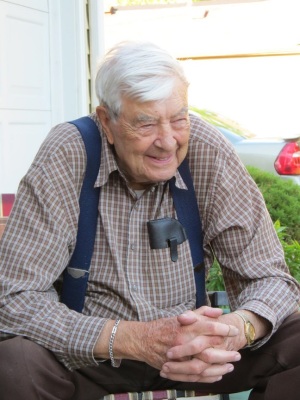 Allen E. Mollenhauer, age 93 of LeSueur died on Monday, April 27, 2020 at Mayo Health System Hospital in Mankato.  He was born on February 15, 1927 in LeSueur to Louis and Amanda (Kahle) Mollenhauer.  Allen attended LeSueur Public Schools. Allen entered the U. S.Army-Air Force on February 15, 1945 and was an M.P. in Germany and honorably discharged in 1946.  He worked for Eastwood Printing until he married Marjorie Mutch on August 14, 1950 at Zion United Church of Christ.  Allen then worked for Cameron Dray Lines, the City of LeSueur in the utilities as a lineman/diesel operator and then began a 32 year career with the LeSueur Public Schools as maintenance supervisor, retiring in 1985.  He enjoyed motorcycling, building and flying remote airplanes, wood working, football, baseball, hunting and fishing.  Allen was an active member of the V.F.W. and the LeSueur Honor Guard. He is survived by his son, James and daughter, Alainna; 3 grandchildren, Adrienne, Aaron & Amelia  and 6 great-grandchildren, Ty, Wyatt, Ian, Kurt, Ryan & Owen. He was preceded in death by his parents; wife, Marjorie in 2016 and a sister, May Esboldt.

As a result of the Covid-19 situation, a celebration of life service will held at a later date. Koldenfuneralhome.com

You can still show your support by sending flowers directly to the family
Share a memory
© 2020 Kolden Funeral Services. All Rights Reserved. Funeral Home website by CFS