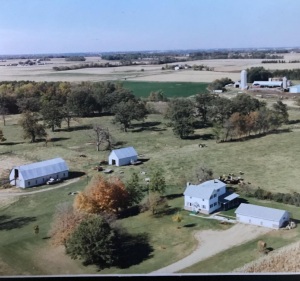 Thomas was born on December 28, 1922 to John and Catherine (Shea) O’Brien in Belle Plaine, MN.  He was the third oldest of 14 children.  He began working at a young age on the family farm.  As a young man he enjoyed going to the local dances.  It was at a dance in Henderson where he met the love of his life, Therese Buley.  They were united in Marriage on September 13, 1952 in Henderson MN.  They enjoyed 66 years of marriage and were blessed with 7 children.

Tom and Therese farmed 160 acres southeast of Belle Plaine.  He raised black angus cattle and crop farmed.  Tom also worked as a cement mason throughout the area and for various Twin City contractors and was a proud member of the Cement Masons Local 633.  His fine craftsmanship is reflected at many locations throughout the Belle Plaine community.  He enjoyed hunting and fishing with his children and brothers.  Tom also enjoyed horses and passed his love of this onto his son Tommy.  If you knew Tom, you know he enjoyed conversation with family, friends and strangers alike.  And he would always have a story to tell you.  His Irish roots really shined with his stories.  His children and grandchildren never tired of his stories of times past.

In retirement Tom and Therese enjoyed traveling, the highlight being a trip to Ireland.  Tom had a strong faith and was a member of Our Lady of the Prairie Catholic Church.  He belonged to the Knights of Columbus and served as an usher.